Fly Fishing in the Footsteps of Giants

There is an irresistible history to fly fishing that even the most progressive of game anglers will struggle to repress! A great deal of the techniques, attitudes and ideals of the twenty-first century fly angler have been shaped by the actions of our fly-fishing forbears, and many haven’t changed at all in centuries. I’ll take you through my feelings on fishing in the footsteps of giants.

The Walton/Cotton fishing Temple has stood since 1674

Whilst it would be impossible to throw forward the claim that fly fishing is of entirely British origin (Chinese and Japanese anglers recorded the use of similar techniques long before the British) the suggestion that British waterways nurtured modern recreational fly angling is well founded. The ground breaking work of Halford, Skues and Marryatt established the southern chalk streams of England as the home of fly fishing; the laboratories of men who showed a dedication beyond their contemporaries. The historical value of these piscatorial pioneers, their entomological studies and indeed the chalk streams they fished should not be under-estimated. However, tucked away in the rolling Derbyshire Dales is a little spot so steeped in history and beauty it can leave the visiting angler overwhelmed. Last week after twenty years of imagining this place I finally got to walk in the footsteps of the true angling greats.

You don’t find many fishing huts built like this any more!

Nestled in to a meander of the River Dove lies what is almost unanimously considered to be the single most significant piece of angling history, Charles Cotton’s famous fishing house. Completed in 1674, this simple stone building belies a story of great commitment and companionship. To gain access to this most revered of places first involves a meeting with the Beresford Dale fishery manager Andrew Heath at the aptly named Charles Cotton Hotel In Hartington. Having guided us to the access point by car Andrew, a keen naturalist and dedicated fisherman, spoke in depth of the history of the river, its present environmental condition and his plans for the future of the fishery. Andrew and his two dogs walked us along the lower section of the beat, pointing out likely lies and promising pools with all the warmth and enthusiasm of a man whose job it is to present to anglers one of the best kept secrets in the land. We then paused alongside the famous Pike Pool whilst the heavy wooden gate that segregates the fishing house land from the public footpath was opened. Having spotted umpteen wild and wary browns on the walk up stream I was in no doubt as to the potential of the fishing in this narrow stretch of the Dove. I was so distracted by the fish I was caught off guard by the small, humble stone building that suddenly stood before me. Andrew’s silence at this point showed a dignified respect of the moment that could only be gained by bringing people to the place regularly. The Temple. 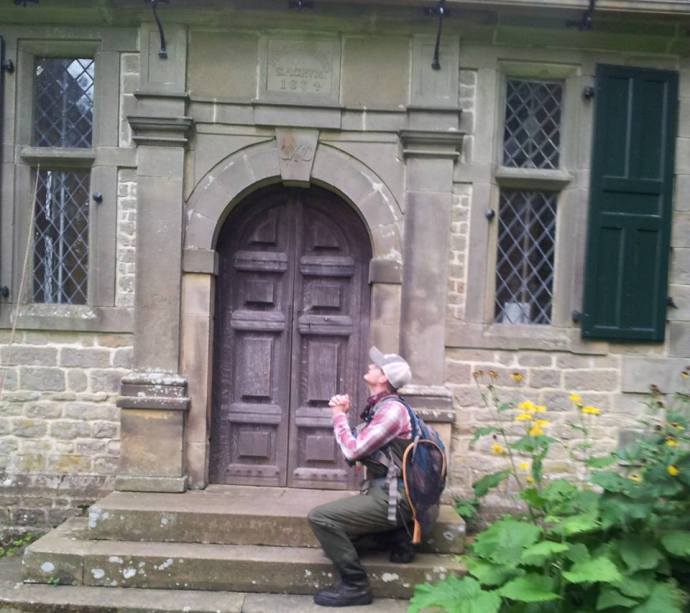 A quick prayer to Isaak Walton and Charles Cotton

Surrounded on three sides by the river in a kind of peninsula, with a delicate clear river about it (Cotton), the temple appears almost as nature. The construction of local limestone seems to have become as constant and timeless as the river itself. The only great extravagance to the exterior of the temple is the intertwined initials, CC of Charles Cotton and IW of Izaak Walton who is of course the author of anglings most famous piece of literature The Compleat Angler. Through a family connection the two became great friends and spent a good deal of time fishing together here on the Beresford Estate which Cotton inherited. So impressed was Walton by Cotton’s prowess with fly fishing tackle(Walton was a pragmatic bait angler at best) that in 1676 Walton asked Cotton to contribute a whole fly fishing section to the newest edition of The Compleat Angler which Cotton managed to produce in less than two weeks. By this time the fishing hut had been standing for two years but Walton was an elderly gentleman and travel in the seventeenth century was arduous. It is thought that Walton never saw the fishing hut which built entirely to commemorate their friendship.

The Compleat Angler, and the key to the Original lock on the temple door

The atmosphere of the place really must be experienced to be believed. Stepping underneath the inscription “Pistcatoribys Sacrvm” and through the door of the Temple cannot fail to inspire images of centuries past. The very thought that Cotton himself had sat here, maybe even wrote his contributions to The Compleat Angler here raises the hairs on your neck. Three hundred and fifty years of conversations between some of the most eminent fishers of the ages seem to have been absorbed and stored in the stoic stone walls. So rich and heavy is the ambience of the room that one can’t help but feel that if you were to stay for longer at any moment these walls may offer back to you some of their silent wisdom. However, the most special and unique feeling the angler experiences on the first visit to the fishing house creeps up slowly at first but eventually stirs the soul. You’re not visiting this place, observing as if it were a museum artefact but you are actually experiencing the Temple. You are here just as Cotton and all manner of luminaries since were; to fish, and to think about fishing and to talk about fishing. Your thoughts, hopes and observations will be taken in too by the walls and you too become part of the history of Cotton’s Temple. You’re eating, drinking, conversing and fishing in the footsteps of the greats, and it’s all yours for the whole day.

The fishing of course is wonderful. It isn’t easy, the river isn’t manicured to accommodate the inexperienced and much of the beat could be described as quite technical. Nor is the river falsified with stocked fish. If you catch a trout or a grayling here it may well be descended from one that Walton or Cotton caught. The grayling were willing take a well presented nymph and are often caught to specimen sizes. The trout showed a definite liking to small cdc olive dun which I presented using Cotton’s own maxim “fine and far off”. My tally of six rises to one fish in the net might just be an indicator of how distracted I was by the history, beauty and significance of the place and the moments of the day, but that single fish was the realisation of twenty years of hope!

Locking and leaving the Temple was a bittersweet moment, as the end of a days fishing always is. Andrew Heath’s dedication to the long term future of the Temple beat is both exceptional and admirable and deserves a great deal of respect and support. With minimal funding he is slowly and lovingly restoring one of the great stretches of trout stream to it’s past glory. The work involved is time consuming, laborious and expensive, but with the support of organisations such a the Trent Rivers Trust, the Environment Agency and of course fellow anglers the task is not only noble but totally achievable.

I really do feel that all fly anglers with any interest in the history of their sport should make at least one visit to the Temple beat of the river Dove in their lives. The cathartic timelessness of the place can’t fail to have an impact on the visitor whilst the lazy meanders of the upper stretches offer quiet seclusion that is increasingly difficult to come by. The Temple Beat time warp offers the angler something completely different to any other piece of water in the country but remains totally accessible and excellent value for money. Beresford Dale is within three hours’ drive of almost all of England and Wales and at just £79 per rod it is an affordable alternative for the chalk stream angler. Day Rods can be booked through Simon Cooper at Fishing Breaks and there will be some fantastic late season fishing to be had. No other fishery offers the opportunity that the Temple beat does and I truly believe that the unique experience offered by Andrew Heath and the Temple Beat and Cotton’s fishing hut is one not to be missed.