Only nine hours after arriving back from an epic adventure in the Lake District (tbc…) I found myself climbing in to a car and heading towards the river Dove, on the border of Staffordshire and Derbyshire. Tired, blurry eyed and a little de-hydrated from the previous days I probably wasn’t at my dazzling best but a carrot had been dangled that was too much to resist.

I’ve fished the Dove for my whole life. My late father taught me to fish there which in its own right has a huge sentimental value. It’s where I caught my first fly-caught trout, where I’ve banked my biggest UK trout, my biggest UK grayling and of the places I’ve been fortunate to visit in different parts of the world it is always the river that I yearn for amongst others. It’s a very special place to me.

I’ve been lucky to fish a number of stretches of the Dove but there are still patches that I’m yet to tackle. One of those is the very private JCB stretch so when Simon called and suggested he may be able to get us on I jumped at such a kind opportunity. Those who know me know that I’m a real “what’s around the next bend” merchant – a man more likely to walk past the 5lb fish just in case there’s a 6lber further upstream. I’ve no idea if I catch fewer or more fish this way but I certainly so more walking than most and that can’t be a bad thing.

I met Simon and his wife Nadine at the CLA Game Fair a few years ago, we hit it off from the get-go through our Dove experiences. As relative newbies they definitely aren’t catching as many fish now as they will in two years time but they’re both learning and improving quickly and are enthusiastic beyond belief. I never really had a “honeymoon period” as a fly angler like Simon and Nadine will be experiencing but I know from learning ultralight spinning that this initial time learning the craft basics and building up the kit and reading the books can be every bit as inspiring as actually getting out there and putting it in to practise!

This was putting it in to practise time though, and I hoped to be able to spend the day helping Simon catch good numbers on french nymph leaders and hopefully get Nadine a few rising fish – all this on a stretch of river I hadn’t seen before and still struggling from the exertions of the day before and with a miserably mixed weather forecast. The adventure truly is in the challenge!

I spent the first twenty minutes knocking off my own nymph-casting cobwebs before Simon and I fished through a likely looking riffle and glide together. He quickly got the hang of “lobbing” a long light leader and reading the spiral indicator for what was a “rock bite” and what was a fish and it wasn’t long before the red-tag jig nymph was nestled in a fish. He followed that up with his first double capture, two grayling on the same rig – as a guide I’m still not sure how to deal with that scenario but fortunately we had a net each and soon each net had a grayling in it, fantastic! 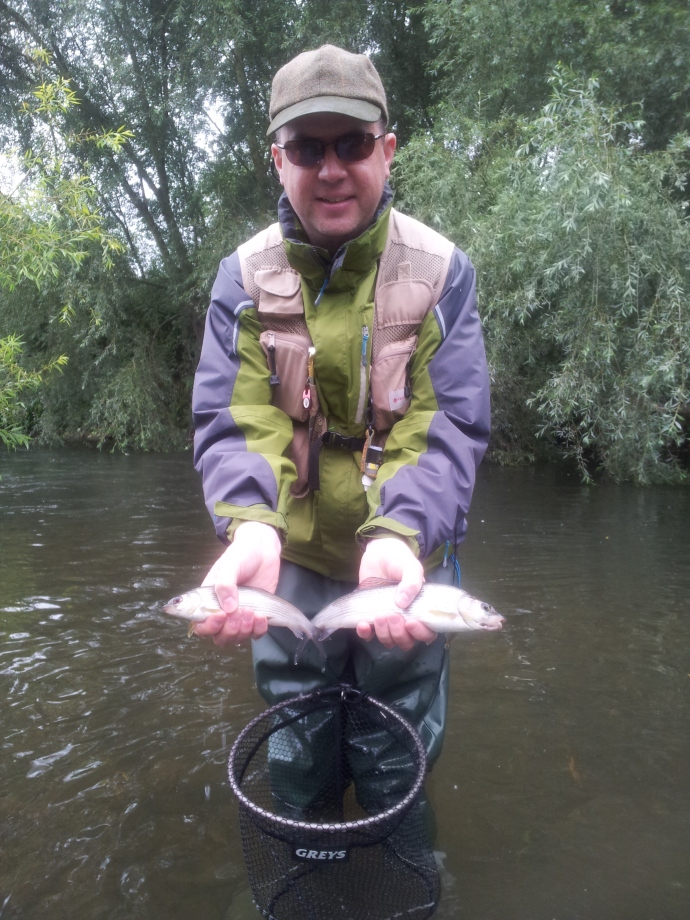 Simon Rose with 2 Grayling in one cast!

The weather closed in not long after and the three of us took shelter for thirty minutes. With mission #1 accomplished the focus was now to switch to Nadine and her more traditional upstream casting techniques.

The weather turned around again quickly (if you don’t like the weather in Debyshire stand still for twenty minutes and wait for it to change) and all of a sudden we were bathed in the kind of warm but humid heat that only seems to occur after a storm. I found a riffle further upstream too hard to resist and climbed in to terrorise a few grayling but also picking off a good trout which was taking small olives as they emerged.

A lovely Dove brownie on a dry

The extra warmth had brought about a solid hatch of these olives. They’re small, really small, and light in colour. They’ll have a Latin name for sure but I’ve been far too busy fishing so far in my life to learn them all. Besides, beyond the fact that it’s a small light olive thing that floats how much more does the angler really need to know?

After spending ten minutes proving to Nadine that she could turn over a longer leader than she thought (how are ladies so much better at casting than men?) we moved up towards what yours truly the guide described as “two good trout” rising further along. I eventually managed to tie on a size 18 small light olive cdc emerger thing (a technical term) and gave Nadine the stage to cover the fish. She did, of course, as expertly as I could ever have done and sure enough the fish rose and took the fly. She also expertly paused to wait for the fish turn before expertly lifting the rod and playing it to the net. It was a grayling, of course, and not just any grayling. A grayling which we weighed at over a pound which is an incredible achievement and one which eclipses my largest Dove grayling on a dry fly. Of course Nadine then went and caught the second “trout” which  was also a grayling and not much smaller than the first. This one took a size twenty small iron blue cdc floaty dun thing.

Nadine with a 1lb+ Grayling on a dry, amazing!

It’s a fine thing, a challenge. Whether you’re learning new techniques, adventuring to new parts, setting yourself targets on more familiar water or assisting others in their own challenges and adventures.. Sure you’ll make some mistakes – I spend as much (if not more) time in trees or untangling rigs as anybody, but when I’m challenging myself to achieve something new getting it a bit wrong just feels right. And when it does fall in to place it feels all the better for it.