Posted on September 6, 2014 by andybbuckley

I need to start off here by issuing a frank and honest apology to anybody who heard me say this in the weeks prior to my recent trip to Slovenia:

“I’m not fussed about catching a marble trout, I really want a nice grayling and just to catch some fish”

This was absolute piffle. Codswallop. A real humdinger. This is a lie I told so many people so many times that I had almost started to believe it myself but it couldn’t have been further from the truth. I love trout, I love trout fishing and until the (unlikely) day that I have caught every single Trutta genus on the planet I’l always obsess about catching the various sub-species.

I’ve no idea when I first saw a picture of a marble trout. I was clearly young enough to have forgotten the semantics of the moment but old enough to have been mesmerised by this peculiarly painted but oh so beautiful fish. They take their name from the unusual patterning of their spots which unlike a brown or rainbow trout seem in places to blend in to each other. The effect of these ivory coloured spots over hues of dark olive green, pale olive and gold give the impression of marble. They’re a totally unique and gorgeous looking fish that is only found in three river basins on the whole planet. Throw in that they grow to mammoth sizes (20kg plus!) feeding off a diet of other fish and you’ve got quite the sport  fish – who wouldn’t want to catch one?!

Colin first floated the idea of a trip to Slovenia in the spring. Colin is one of those fishing mates who manages to juggle real-life commitments like a proper job and a young family and still be a really good angler. He’d never admit it of course, a clever ploy which means I’m always surprised at how much better Colin is than Colin said he was. He’s also super organised which means that he’s my ideal trip-organising buddy. Flights to Slovenia are very inexpensive, accommodation is fantastic value and with Slovenia being such a small country there is a huge array of angling opportunities within 90 minutes drive of anywhere. 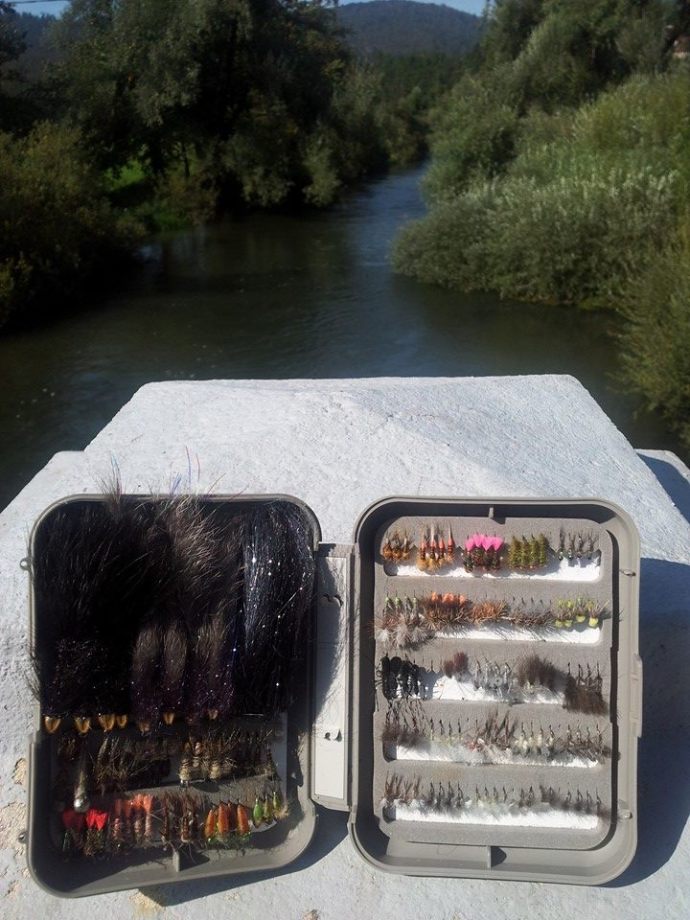 We chose a self-catering lodge right on the banks of the majestic Idricja river which is home to -amongst other species- some huge marble trout (which “I wasn’t that fussed about”). Having been left in charge of planning the kit I filled fly boxes with everything from size 4 streamers to size 24 CDC things the hooks of which barely clung on in my slotted foam fly boxes such was their minuscule metalwork. I’ll confess I didn’t have time to tie all the flies but I did find the the Fulling Mill Tactical Range had pretty much everything I had been advised to take with us plus some more that I just couldn’t resist. Even the fly shop guys get caught out buying heaps of flies, I promise!

We pitched up at the apartment at around 3pm and decided that rather than get settled in to the place we’d get stuck in to the fishing. The first fish I hooked in Slovenia was tempted by a nymph I tie myself fished on a french leader through a deep dark pool. I didn’t land it. In fact, I didn’t even see it for the ten or so seconds I had it on. There was no thrashing, writhing, wriggling just pure brute force and power. I fish a Sage ESN 10′ 3# which has never even been challenged before in the UK but this fish put some serious heat on me and I didn’t feel like I had too much to give back. The hook pulled – no breakages or drama but had I have not hit the brakes the fish was headed in to a hole in the bedrock of the pool where it would have cut me off anyway. Was it a marble?I I’ll never know. What I did know at that point was that I had possibly just stuffed my shot at the fish of a lifetime. 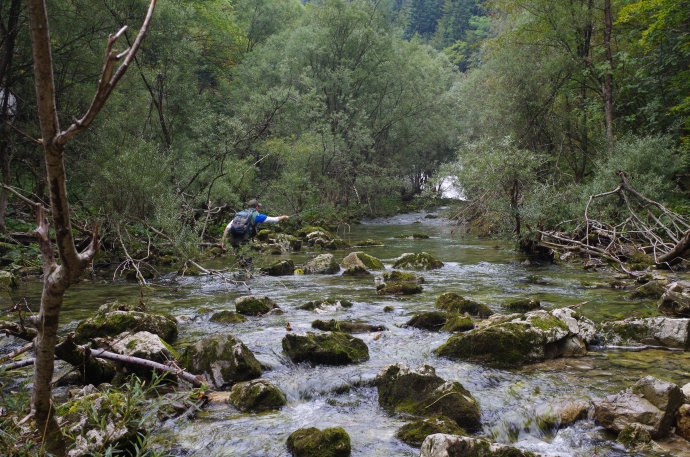 We caught fish that evening. We caught fish each day and each evening for that matter but the third and final full day will stay with me for some time. It rained the previous evening and through in to the third morning. Not enough to out off a couple of hardy English anglers abroad. We made the drive to the local fly shop in the town of Kobabrid, Soca Fly who advised us that the rain would have raised the level of the tributaries enough to blow them out for the morning at least, but would have just muddies the waters of the Soca river enough to turn on the resident marble trout which would be using the murkier water to launch their attacks on unsuspecting prey fish.

We managed nearly three hours of swinging heavy conehead streamers on the might Soca. The heaviest rod I had was a 5# which made for a morning of particularly hair-raising tungsten throwing. Colin had one good pull, I was just delighted to have gotten out of the experience alive and unscathed though I did feel like I had just given away three hours of my life to a cause I never really believed in. We set off for a tributary called the Tolminka, where things really began to unravel. 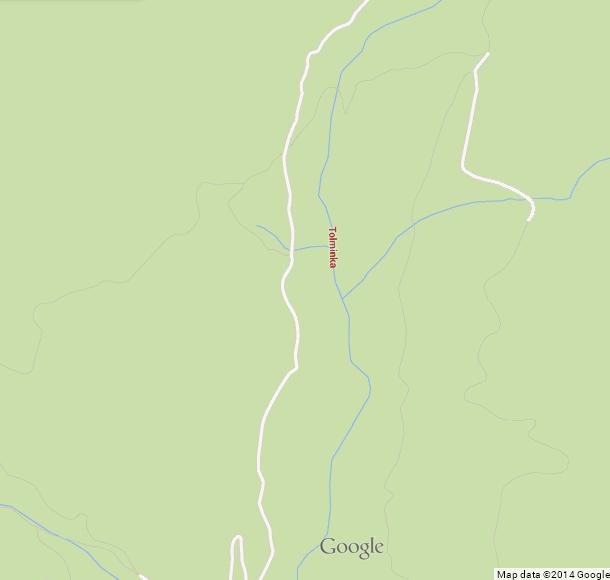 Lost – where the hell are we Colin?!

Maps are great, we’d have been pretty stuck without one. Sat Nav hardware in cars is great, we’d have been lost on many occasions without that too, but sometimes though they don’t do the job so well. The west bank of the Tolminka is one of those places. The map shows a road running parallel to the river and very close to it, as does the Sat Nav so we chose to follow this road to the headwaters. Where both the map and Sat Nav don’t give great information is depth. Colin and I found ourselves winding along a single lane dirt road through dense forest with the river some 500 feet of almost sheer drop below us – totally inaccessible. After an hour of frankly terrifying back country driving we decided to turn back and fish the river way further downstream. On the way back the sheer drop was on Colin’s side of the car and not mine which made for a far more comfortable return journey for myself.

Nearly at the very bottom of the drive we found a small public information sign which we were able to translate roughly to “Tolminka Gorge 10min walk”. Fantastic, we’ll park up here and check it out we say, proud that after two hours we might actually do some fishing. The winding path was a steep downhill affair – the type that makes your legs try to move faster than you actually want them to but being the young, fit explorers that we are it was no issue. The issue arose at the bottom of the descent to the gorge. We expected deep azure blue pools with big fish lined up taking nymphs, maybe they’d even look up for some terrestrials. There was bound to be a real monster which would hit a streamer if it came within a few yards of him. What we found was a visitor centre, a gift store, a restaurant, a concrete car park and a little booth selling tourist information. Attached to the little booth was a sign that read “no fishing in the gorge”. The trudge back up the steep path was made in complete silence.

A further hour was spent struggling to find an area of the Tolminka we actually wanted to fish. We gave up on that too eventually and headed for the confluence with the Soca where we caught a mixture of wild and stocked rainbows on swung streamers before Colin got his arse handed to him in some particularly powerful water and got very wet. At this point we decided to cut our losses and head back to fish the little stream we hit on the first afternoon. The weather was good now, we figured something  entomological might happen in the evening. 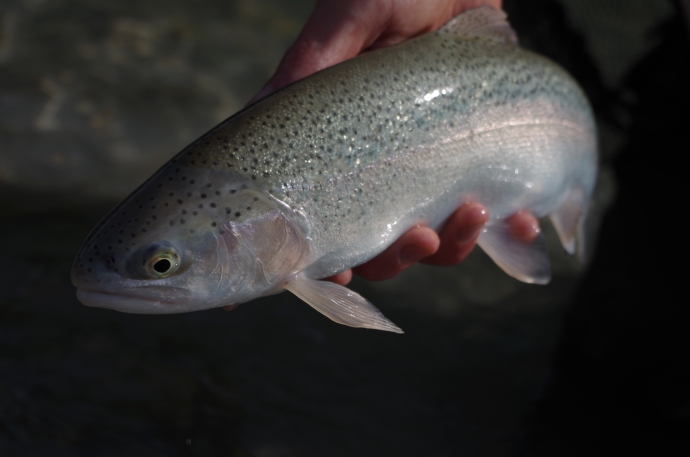 Colin and I picked up fish almost right away on nymphs. Colin put another fish in the net, peered and and called to me that it looked like  a brownie. It did look like a brownie but in actually fact Colin had done what had seemed impossible and actually nailed a marble! It was hard not to be envious but given that in just one day he had thrashed streamers around on a 6# in the pouring rain, spent two hours driving down a road that would have been the end of us if he made one false move and then came close to being swept away by one of the most powerful rivers in Slovenia karma had probably drifted back in his direction and rightly so.

We fished on as the light began to fade in the narrow valley of the beautiful freestone stream, picking up smaller rainbows in pocket water on whatever flies we could keep in the zone for long enough for them to eat. The first proper pool we came to was actually below what appeared to be a very old man-made weir. It just looked fishy. I knew that my french leader was the way to fish it through, so I set about the pool methodically working towards the white water. The take was as clear as day, one of those you just can’t miss and from the moment the hook hit home it was obvious this wasn’t another 8″ rainbow. This was a deep, dogged fight, exactly what you’d expect from a decent brownie but I had already had enough of a look to know that this time it wasn’t. Colin had noticed the commotion from above the weirpool and came down to take some snaps with his DSLR. I thought I had the fish beaten, and began to guide it towards my net when the flash of the camera went off causing the fish to bolt twenty yards downstream in a matter of seconds! I ran down after the fish and after a hair raising few minutes between some sharp rocks eventually had him in the net. I looked down at my first marble trout, proud that I had caught it from a small river that hadn’t been mentioned to us before on a method that I love to fish. I had done it my way. 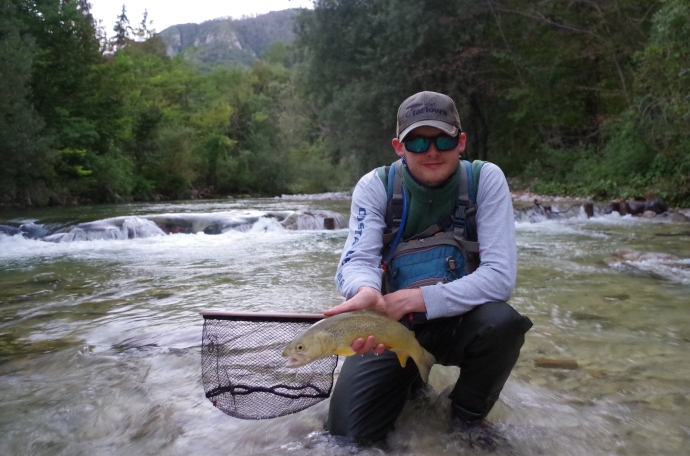 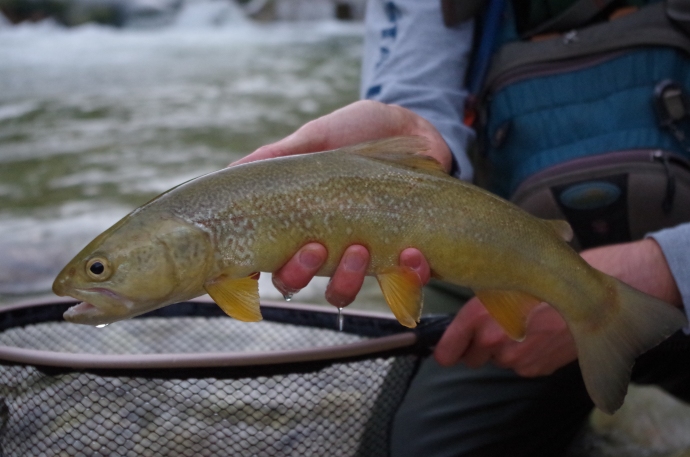 Nailed it. I love Slovenia!

One thought on “Finding My Marbles”