A September to Remember

Posted on September 15, 2015 by andybbuckley

September is a funny old month, particularly for a trout angler. For the last few years at least the Autumn season has brought conditions more reminiscent of mid-summer with warm temperatures and low precipitation reducing the river levels to their minimum. This time last year I fished the Usk at its low point for the year and now the Dove back in Derbyshire is too at its lowest. Whatever you believe may be causing the meteorological change to the back end of the season there can be no doubt that a new pattern has emerged over the last few years and it makes for some interesting and engaging angling opportunities.

September conditions like these seem to have become the norm

Bathed in sunshine and with little rainfall, Derbyshire has been at its very best, even if the low water has made the fishing more difficult. During the day the fish have held up in smaller pockets than usual, eschewing the best feeding lies for areas which provide the safety of water over their backs. The unseasonal hatches largely go unnoticed during the day with the trout as confused about the presence of Iron Blue duns as this angler was. Blue Winged Olives have poured out of the low clear water during the afternoons but the fish have chosen to turn a blind eye, I can only assume that they do it knowing that in a few hours the water will be littered with the spinners of the evening fall. 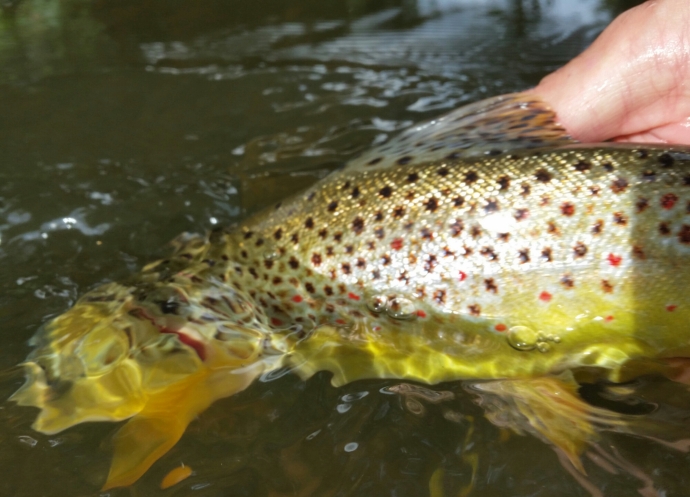 As wild as the hills, I've got so much respect for these brownies

The trout certainly aren’t alone in the river at this time of year. For the first time in two decades of fishing the Dove I came across a Salmon carcass on the river bank. It’s sad to think that this fish has made it from the Humber, right up the Trent, then up the Dove to this point before meeting its  (presumably) furry maker but these things happen in nature. Hopefully this particular fish was on its way back from a successful mission. 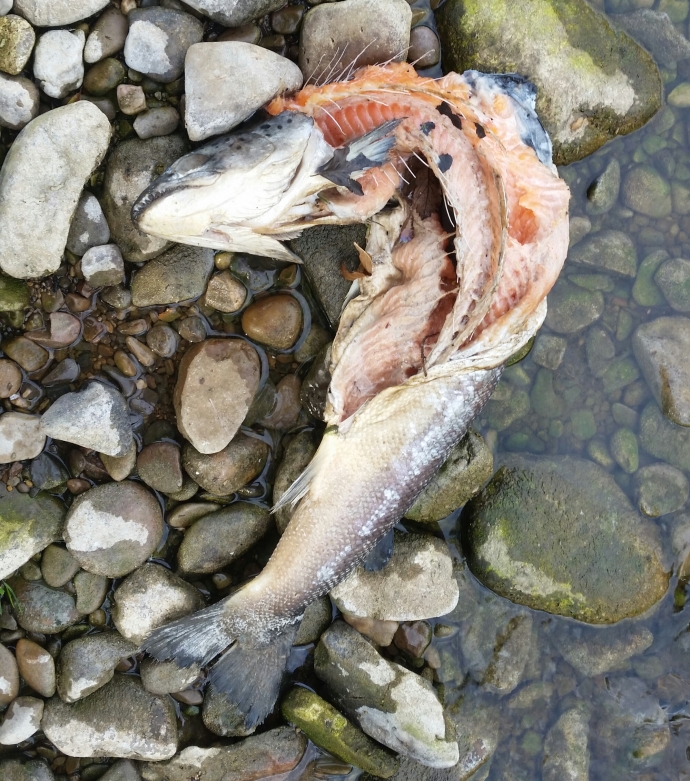 A sad end for a grand fish, but a death like this creates all sorts of life

The evening spinner falls have been incredible, some of the best fishing I’ve had in this part of the country in a long time. The warm bright days continue to encourage more of the nymphs to make their journey out of the water and on to the wing and with the trout hiding away in the depths the insects are almost entirely untroubled in their dun stage. Come the evening though the game changes as the trout take up their feeding positions in anticipation of a safe and easy banquet. A conveyor belt of spinners over their heads causes the fish to rhythm rise in the bubble lines or daisy chain in the slacks – often the hardest part of the spinner game is focusing on just one fish. 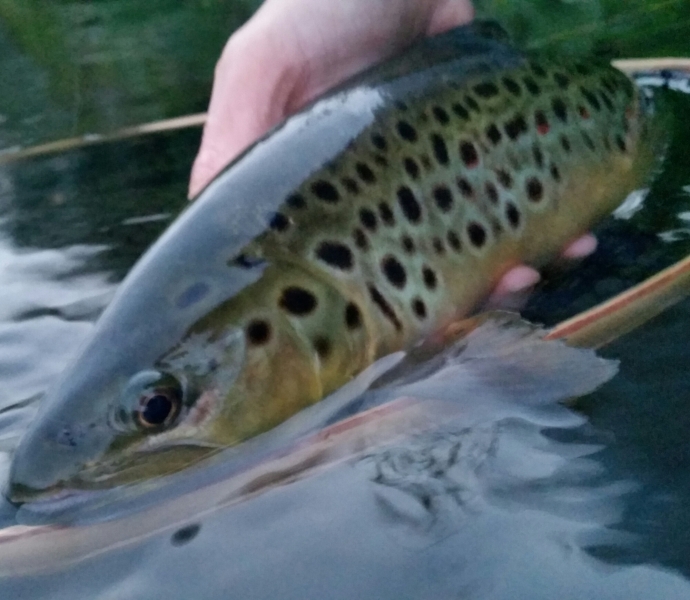 It’s not all plain sailing though, there’s an art to spinner fishing and in my opinion it comes down entirely to one key ability – avoiding any drag at all. A river that is slow and low makes for wary fish and those tiny little micro currents pushing your leader and fly around are going to cause you a headache. There are all manner of funky casts to reduce drag and they’re all worth learning but sometimes it just comes down to a little luck. I made four casts to the fish in the picture above with my trusty Fulling Mill Apricot Spinner, all along the same line and to the same distance. The first three presentations I could see the fly had some “micro-drag” problems, the fourth cast didn’t.

The spinner falls have made for some unforgettable sport and have lasted right up until the last light and the first sign of cold fingers or chill down the spine has usually heralded the end of the mayhem. It never ceases to amaze me how nature and wildlife can be in such synchronicity to the rising and setting of the sun – it really can feel like somebody flicked a switch and the bugs, birds and trout all vanished, leaving you waist deep in water holding a fishing rod and waiting for nothing.

Not the best photo but a reminder of things to come...

Such has been the depth and insensity of the spinner fall that the drive home has been made in the sort of giddy bliss that is usually only experienced during the Mayfly season, and each time I talk with friends about the next trip it’s made with the sure anticipation of another incredible evening. In fact, we’ve taken the spinner fall for granted this autumn and almost forgotten that the bugs are finite.
Then came a timely reminder of where we are in the year. The photo above isn’t one of my finest but the colours in the background struck me – spectacular golds and reds that only happen for a few weeks. It doesnt feel like it but it’s nearly the end of the trout season again. It’s time to get the grayling boxes filled…

2 thoughts on “A September to Remember”