There’s something irresistible about fishing headwater trout streams. You know the ones, miles up in to the hills and usually so tiny you that unless you really get out and look for them you may not even find them. Because they flow so close to their springs they are often clear and cool and this makes for great habitat for underwater bugs and the things that eat them. They’re not easy waters, that’s for sure, they’re wild and unfettled and you know that a days fishing could see you lose a few flies and follicles. The problem is that somehow not only do these tiny waters hold beautiful wild fish but they can hold some inordinately large ones. You may even get to hook one if you’re lucky…

I’m certainly geographically very fortunate if nothing else. As a Derbyshire boy I have access to some of the finest headwater fishing around as the Peak District sources some of the most renowned fly fisheries in Europe. The Dove, Derwent and Wye are all born here and anglers are drawn to fish for wild trout in these famous rivers. There are other streams though, smaller less glamorous waters with secrets hiding in their petit pools and riffles.

At its headwaters the Manifold is a tiny river but rich in insect life – and trout!

One such river is the Manifold, a Dove tributary which rises from the ground at Axe Edge near the town of Buxton. It’s a river I haven’t fished enough considering how easy it can be to access so when I found a spare date in my diary this week I decided to bypass the middle-reaches spinner fall mayhem and get intimate upstream. I’m not going to tell anybody exactly where I was today – that would spoil the fun – but I will tell you that it’s a day ticket stretch run by the Peak Angling Passport Scheme which you could fish tomorrow for less than a round of drinks.

I arrived at the river far later than I had planned and by 1pm the sun was searingly bright in the bluest of skies, it really didn’t look like a day to be in the headwaters and I knew it. My frustration was exacerbated when I found that there were two other anglers fishing the same beat – ugh! I considered getting back in to the car and finding something else but instead I spent twenty minutes walking in the opposite direction to the other anglers. I approached a deep pool which was sheltered from the harsh sun and no sooner had I considered that this was a likely spot for a rising fish one rose ten yards above me.

I hunkered down on my knees and dragged myself in to a position where I could observe the fish without spooking it. The thing was, for ten minutes it didn’t rise again and it became clear that I had probably upset him getting in to place. I decided on a couple of speculative casts with a #17 Fulling Mill Retirer Sedge as it seems to draw fish without being too obtrusive. I pitched a very casual cast a couple of feet above where he rose and in a flash there was a large trout shape inches below the fly, seemingly counting the turns of thread as it drifted downstream with the fly. My heart jumped out of my chest and I told myself out loud “delay the strike andy, big fish big mouth” as the head finally lifted out of the water and over the fly. I did delay the strike and a second later the fish rocketed out of the water in an explosion of spots and spray. 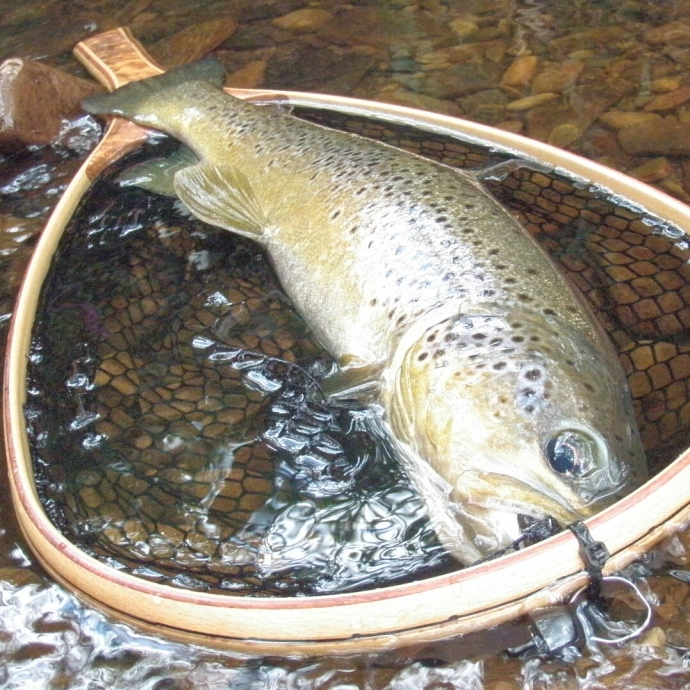 Luckily that was as dramatic as this fight ever became and within half a minute the fish was in the net. At 18″ he won’t break any records but given the river here was less than ten feet wide this is a very significant wild brown trout. For an old fish his condition seemed very good and he took only a few moments to revive before gliding very casually straight back to his position.

He had a “diet of minnows” head on him

As you might expect this was as easy as it got. Over the next four hours I missed another fish on a dry and landed a couple of very small brownies on beaded nymphs. There was barely a cloud in the sky and the valley was totally still, even the insects seemed to have taken a siesta. I searched for three hours and didn’t find a rising fish but a wander down a very tiny tributary changed that immediately.

The fish rose confidently just off the grass to the right of the stream. I’ve no idea what he rose to but he took the Retirer Sedge with no qualms at all. Another very solid fish for such a small water and further evidence that these headwater rivers can sustain far larger trout than you might imagine.

Another Manifold cracker on a dry

I missed another big fish back on the main river just as the sun set and I’m not sure how, but having landed two corking trout and a handful of smaller fish earlier in the day it didn’t seem to matter too much. Part of the culture of fishing these streams is accepting that thirty fish days don’t happen here. These are places to test your wits against the wildest of fish and the most awkward of conditions and simply put you have to be on your A-Game or you’ll struggle. Organisations like the Peak Angling Passport are opening up more and more headwater streams to public fishing and really need the support of anglers. Some of their waters are just a few pounds to fish for a day and can hold trout beyond anything you may imagine. Give them a go!