I’m not very good at waiting. I’m sure I used to be, but three years spent living at breakneck speed in the capital has created some kind of impatient monster in me. I’m especially bad at waiting for things of which the outcome is beyond my control – like Work Permits for instance. But good things come to those who wait apparently and as a fisherman there are worse places to be exiled than rural Derbyshire, it is the Grayling season after all and since I have nothing else going on at all then what else can I do?
Many river anglers love the month of May for the arrival of the Danica and the fish-fest of Duffers Fortnight. Some prefer July and August for the super technical low water tricky Trico feeders. Others go hard in September when the banks are less trodden and the fish begin their end of season feed-up. I adore being stood chest deep in freezing cold water under grey skies Grayling fishing in November. 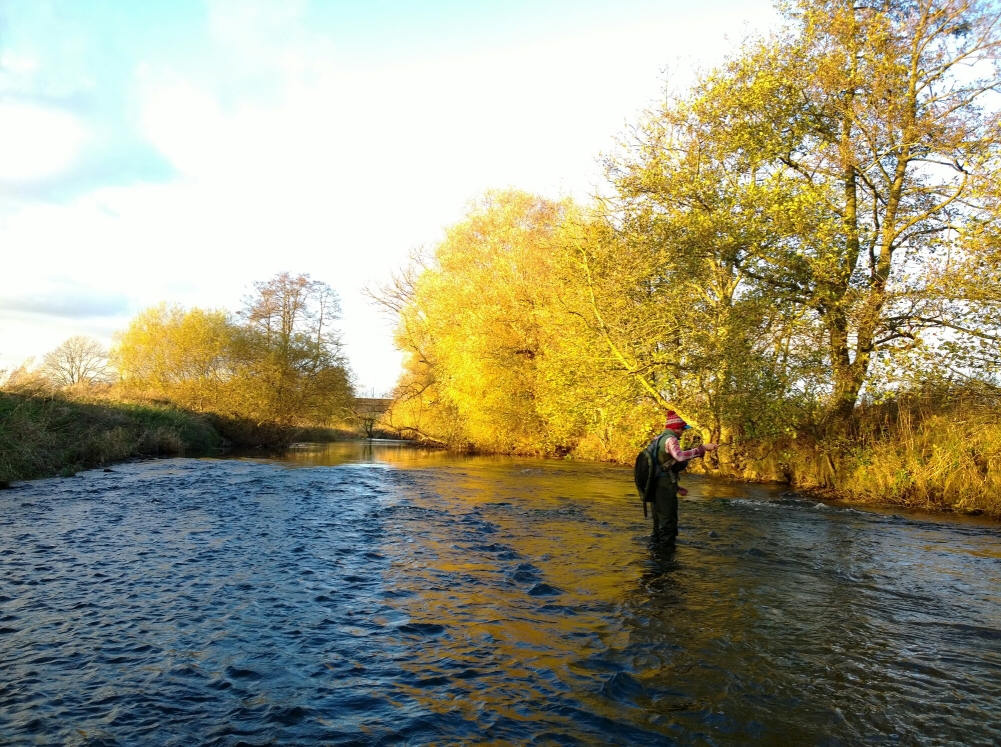 Autumn has arrived on the Derbyshire Dove

November is a funny old month these days. The shift of the seasons has changed November from a month of ice and snow to a more mild and accomodating time, and as soon as I smell the gunpowder and bonfires in the air at the end of the first week I know it’s time to dust off the bugs. The milder conditions also make for some of the most spectacular Autmunal landscapes as the trees cling on to their auburn and golden hues for a little while longer. We occasionally recieve a wet and windy reminder that winter is creeping upon us but for the time being all is reasonably calm and comfortable and it’s time to catch Grayling.

Colin slips back a Dove Grayling

The advent of modern nymphing techniques has enabled the grayling angler to present flies in more areas and with more success than ever before. These days unless there is a very obvious hatch happening the first rod to be strung up is my 10′ 3# with a french nymph leader. Like ir or loathe it this style of fly fishing without a fly line is hugely effective in many different types of water and put simply being able to fish this style effectively will improve your catch rate. No doubt at all, these techniques are attritional but they’re also all-action – lots of casting, re-casting, moving, inducing, striking, oooh-ing “that was definitely a fish”-ing. This is a technique for those of us who don’t like waiting!

If you’re anything like me there’ll be lots of fly changes too. I’m not sure if I do it to keep the fish coming to the net or just to keep my fingers moving but I definitely chop and change an awful lot. Matching the point fly to the depth and speed of the water you’re fishing is to me very important, it pays to be proactive and to keep ringing the changes.
As Colin and I approached our first pool of the day one crisp morning I hesitated for a moment to put a single cast behind some weed “just in case”. The indicator twitched, the fish was hooked and landed and I was 1 & 1 for the day within seconds. The mixture of guilt and smugness was too much so I put the rod away for an hour to guide Colin who went on to catch a heap of really nice fish on his new kit – another ‘No Fly Line’ convert is born.

Cheespaste Pete made the journey up to Derbyshire too, again with a new nymphing outfit and with a goal too – a new personal best Grayling, no pressure there then. Pete fished long and hard and very well in patches too, catching Grayling and out of season Brown Trout through the day. His technique sharpened up quickly and I felt sure that at some point he would get a chance at a larger fish. He expertly led his two nymphs through a riffle along a treeline and struck the slightest of twitches on the indicator. After some careful and skillfull guiding of the fish around the trees and through the current we had his new PB Grayling in the net, mission accomplished! 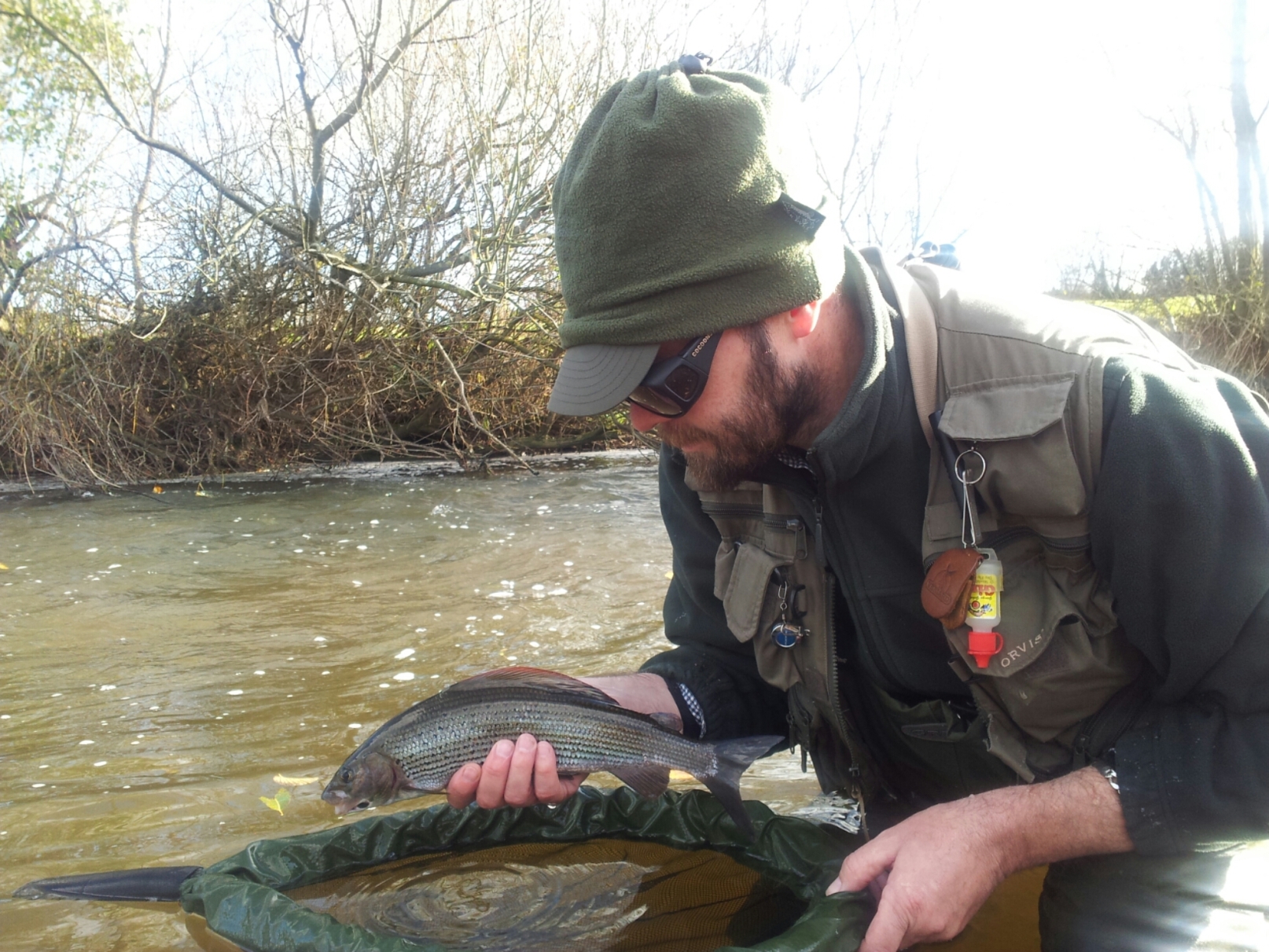 Cheesepaste Pete getting it done

Rich Chapman of Sellfish Media and I took ourselves further in to the Peak District one Sunday morning to fish the Isaak Walton Hotel area of the river Dove at Dovedale. It’s fair to say I wasn’t at my best, having only had two hours sleep after a rum fuelled village rampage with some old mates that ended at gone three in the morning. We both found the going tough, neither of us being familiar with the water and the “Grayling Expert” (Rich’s words not mine) suffering from a cataclysmic hangover but we both picked up the odd fish through the day. After a discussion about whether we should call time on the fishing and deciding to carry on I was rewarded with a fish of around a pound and a half which all things considered was a fair outcome. I do feel like I’ve got unfinished business with this area though.

Hungover, tired and a mess. This gorgeous Grayling made my day!

I’m still waiting. It’s pretty much all I can do for the moment. The wait though has given me the opportunity to spend time with folks and fish that I may not have had chance to otherwise and in truth I’m really pleased to have been able to sneak in some Grayling fishing and hopefully I’ll get the chance to chase a few more before I leave. While the fishing is good and the company is excellent where else would i want to be? If I can keep turning “waiting” in to “fishing” at the rate I have done recently then the time will just fly by.