Posted on January 1, 2016 by andybbuckley

I don’t care whether you’re Joe Bloggs or Mick Brown, the second you push one of those trebles home the rest of the set become a disaster waiting to happen, be it catching on snags, becoming embedded elsewhere on the fish or getting fouled in the net when your catch thrashes – the chances for things to wrong increase dramatically with trebles. Allied to this they’re magnets for weed and other debris and you’ve got a recipe for frustration.

For years I had longed for an alternative to trebles and had removed all but one set from many of my lures as a compromise, but I still wasn’t comfortable. Then out of a trade catalogue beamed the alternative I might just be waiting for…. 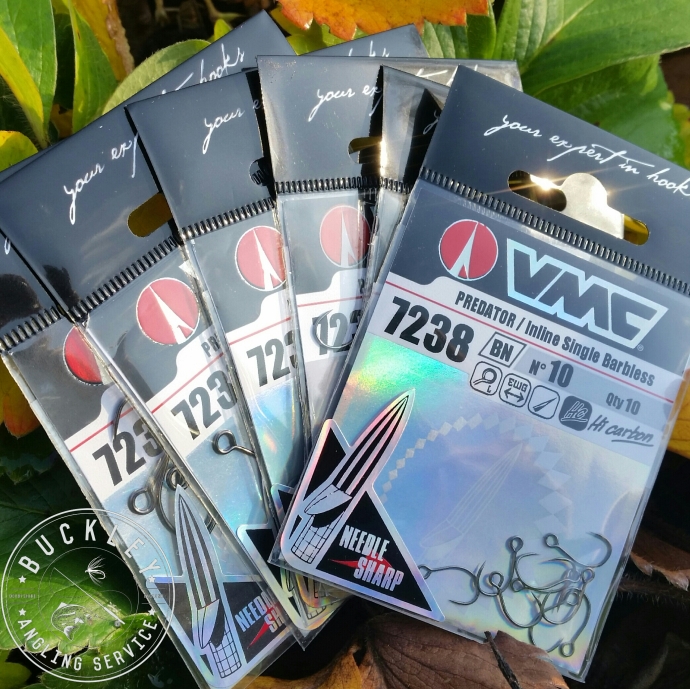 VMC 7238 Inline Barbless Lure Hooks – the answer to your prayers!

Specialist lure singles, why hadn’t I thought of that?! There sat glistening from the glossy pages of the VMC manual were the 7238 Inline Singles, barbless ones too! Filled with optimism about the discovery of a potential game-changer I got hold of as many as I could in as many sizes as possible and sat at a table tearing my fingers to shreds trying to remove the crusty old trebles (and the razor sharp new ones) from my lures. Half a pint of blood later and all of my favourite lures were rigged up and ready to go.

Unfortunately when I looked again I realised that half of the hooks were rigged upside down so I had to remove them to rectify the issue. It was during this process that I learned just how sharp the 7238 really is – the points are truly venomous. With their wide vertical eye and super short shank they look a little different to any other type of hook you may have seen but that big wide eye enables the hook to move freely below your lures. 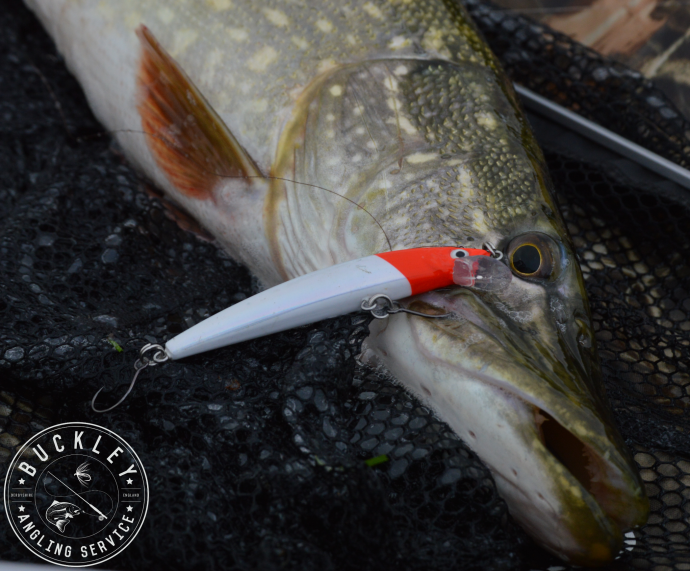 I did have a few reservations though. Will I miss any takes for not having all those hooks points? Will they throw the lure more easilly? Will the change of hooks alter the action of my lures? Well, I can deal with the first two questions right now. In the three months since I put these singles on to my hard baits I have not missed a single hit. In the same time I have not lost a single fish.  The hookup rate and hold rate is up until now perfect and I have not lost a pike, perch, or zander on the VMC 7238. I’m sure it’s down to the pressure of the hook set being applied through a single point rather than spread through three causing a far more positive hold. It still staggers me, but I’ve become accustomed to striking fish on these hooks and getting them in the net every time and I can’t help but think that the circular shape is key to the success of these hooks. Actually in terms of writing this article the net has been the biggest issue as those barbless hooks seem to fall right out of their mouths as soon as the line goes slack.

It took nearly a dozen fish before I could get a hook hold photo – when the line goes slack the lure falls out almost every time!

As for the action being altered by the lighter hook I am yet to see a lure that hasn’t been made to look more enticing by the extra freedom of movement provided by the 7238 Inline. Crank baits wiggle more, vibe baits rattle more and neutral buoyancy lures like the Savage Gear Hard 4-Play seem more weightless in the water – in short it’s all good. I’ve definitely noticed that I’m gathering less weed than I had with trebles too, and I’ve even played with turning the belly hook “the wrong way round” to avoid weed and snags with no impact on that 100% hook hold rate.

The 7238 has also stayed sharp, and I mean really sharp. They’ve been been bounced along the bottom, over rocks, set in to fish and really gone through the mill but I can’t see any evidence of any wear at all.

I’d like to point out a few issues and design flaws with single hooks on lures. But I can’t. I simply don’t understand why these hooks aren’t  the norm on all predator fishing lures in the UK and would implore anybody reading this review to get hold of some and try them out on their favourite baits. You’ll find increased hookup rates, that you hold on to more fish, have far fewer issues with hooks getting caught up and most importantly you’ll reduce both the handling time of your fish and the damage done to their mouths during the process. If you’re looking for a New Years resolution then Lure Singles like the VMC 7238 Inline Barbless might just be the one to go for.