Christmas Fishes and the Great Catfish of Old Florence

It’s been a festive mixed bag here at Incompleat Towers. Unsettled weather conditions, wide fluctuations in air pressure and the many seasonal obligationswe’re all liable for at this time of year has made for a tough few weeks of fishing. I don’t know whether it’s global warming, climate change, season shift or any other kind of pattern but December seems to be warmer and wetter than I remember a few years back. Looking through the window now I can still see a few auburn Autmn leaves clinging on and more greenery than I would expect for this time of year. There won’t be many “White Christmas” betting slips handed in this year – I fear that a “Flooded February” wager might be a wiser investment.

That’s not to say it hasn’t been chilly every now and again though. Cheesepaste Pete came up from London for a day Grayling fishing on a nice frosty morning. A clear and falling river, light wind and settled pressure promised to make for one of the best days Grayling fishing we were likely to have, and the talk at tackling up time was about what sort of cricket score we might rattle through, and maybe even a two pounder. 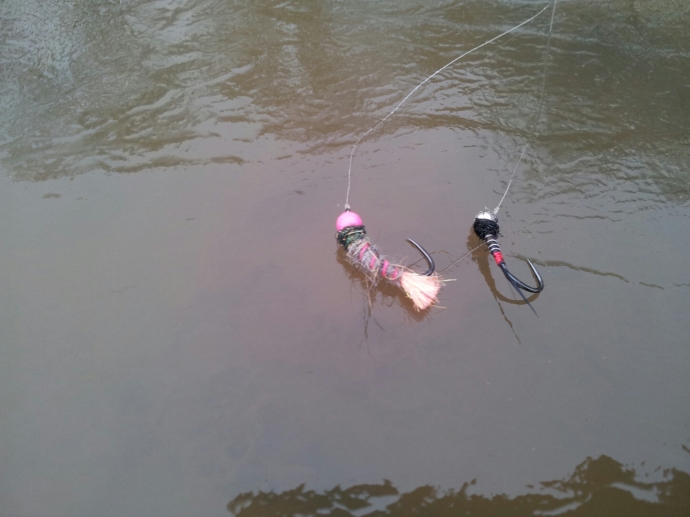 We caught one fish between us all day. I have absolutely no idea what went so wrong, this is the first time in a long time I’ve been totally stumped on a stretch of river I’ve fished for over twenty years. Maybe the water temperature dropped out, maybe the pressure change over night put the fish down, maybe Pete and i just fished really badly – I have absolutely no idea. Still, this is what makes fishing so engaging, apparently. We engaged in a beer afterwards and erased the day from our memories. 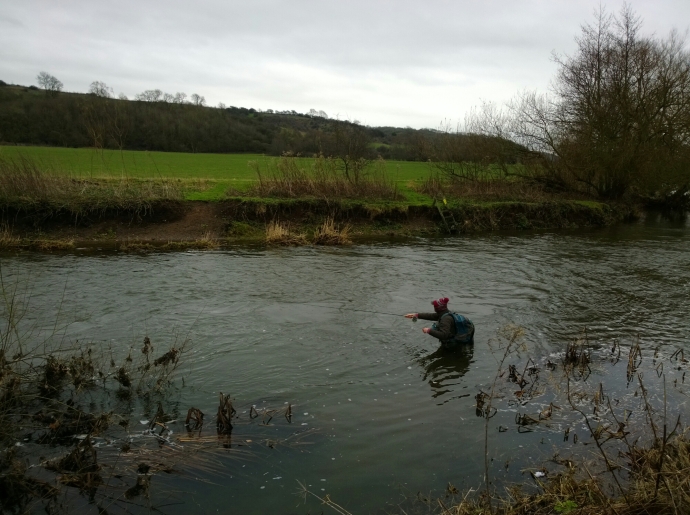 This time of year isn’t just about Grayling fishing, it’s a fantastic time of year to throw a few lures for Pike too. The warmer conditions make for pike that still have a higher metablolic rate and are more ‘charged up” than usual. Simon kindly allowed me to guest with him on a lake that I have driven past thousands of times over the last few decades and like any fisherman driving past a piece of water I’ve always wondered what might be lurking beneath.

We caught a few Pike and a Perch, and while none of these fish are going to break any records they were reward enough for getting out on what was a brutally blustery day. Switching regularly between deep diving hard crankbaits and soft plastics fished slowly along the lake bed, we picked fish up fairly consistently for most of the day, bites only drying up as the sun dipped down behind the edge of the Peak District. 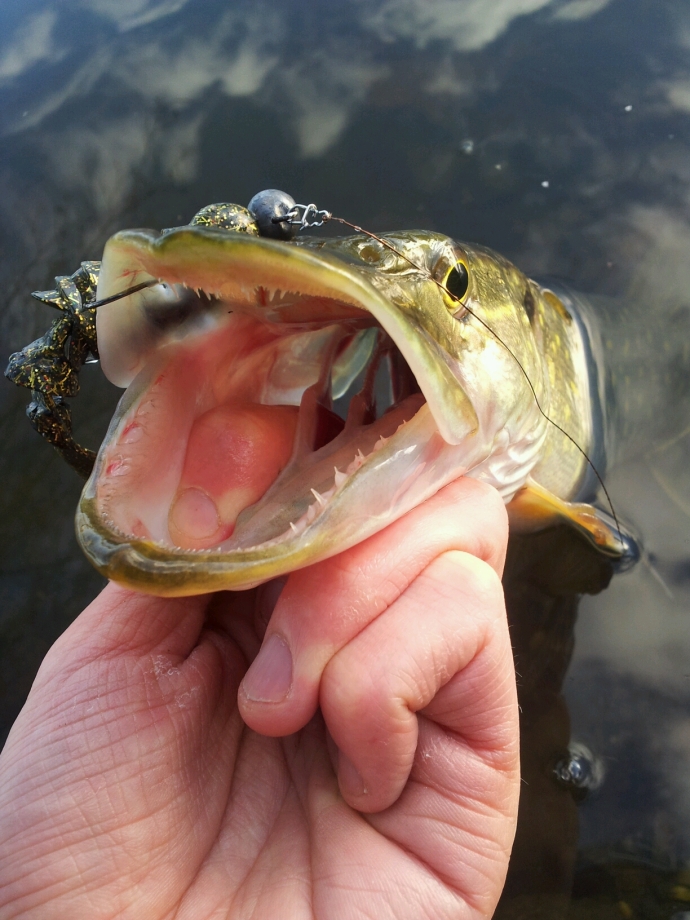 The most important session of the Season however was a two hour baitfishing trip with Jake, the nine year old son of some family friends. I’ve fished with Jake before in warmer months and he’s always caught plenty of fish with a little supervision. Unforunately catching a bag full of fish on a warm day in June is a lot easier than doing it on a foul day in December so I was a little apprehensive when I was asked if I could get him out on the bank earlier this week.

It was a frustrating few hours with plenty of missed bites and the inevitable boredom that comes with watching a float that hasn’t moved for twenty minutes but just when I had lost all hope the fluorescent orange tip bobbed and slid away. I struck (Jake was having a stick fight with a tree) and handed the pole over. He’s a smart kid and had remembered exactly how to play a fish which I was really impressed with and he soon had a lovely carpy-crusciany thing in the net. Whether this was a reward for sticking it out or a Christmas Miracle I don’t know but I’m sure it’ll be easier to get him out for a fish again because he still doesn’t have a blank under his belt! 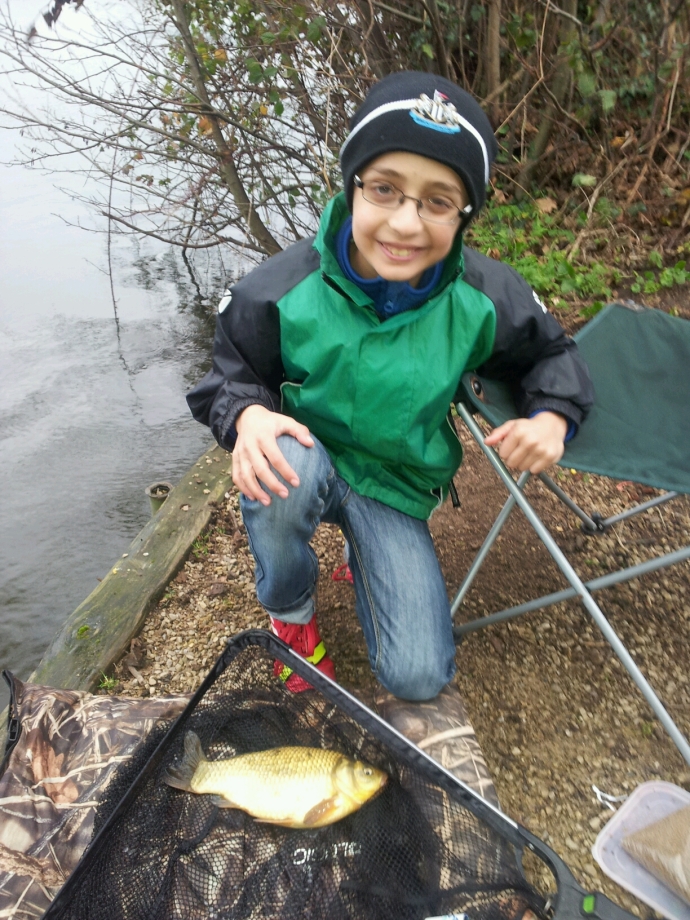 You’ll be astonished to discover that The Incompelat Angler waffles in the national fishing press as well is this little blog, so just a quick heads up to you all about my latest article in Trout Fisherman Magazine. I haven’t met many anglers who have caught catfish on flies by design, even fewer who have done it in such grandiose surroundings as the heart of historical Florence but that was the challenge set earlier in the year. If you happen across a copy in your newsagent then please support the magazine and buy a copy!

Thanks to everybody who has taken the time to read, comment, support and inspire me to make this little blog, it’s really awesome to see how many people actually find their way here! I’d like to wish all of you a very Merry Christmas and I hope that Santa brings you all the treats and time you could ever wish for – I hear he stopped off at the Sage factory a few weeks ago so some of you boys and girls must have been very good this year!

Merry Christmas to all, have a great one!
andy