Posted on November 1, 2015 by andybbuckley

I some times wonder if my friends know me as well as I hope they should.

“Do you fancy a crack at the Welsh Dee this Sunday Andy?”

What an utterly ridiculous question. Who wouldn’t want to spend the first day of November up to their eyeballs in Welsh grayling? Even a 5 am start and a drive through fog so thick  I could barely see the end of the car bonnet wasn’t going to hold this one back – finally after all this time I was going to spend some time on what is widely regarded as the finest Thymallus watershed in the UK. I’ve no idea how or why it has never happened before but now was the time.

A foggy start to our Welsh grayling adventure

The time was around 07:30 when Jason and I met Alex in Llangollen for breakfast at Alex’s favourite café. Unfortunately Alex’s favourite café had been turned in to some trendy hipster monstrosity since his last visit. It was over priced, under furnished and very very closed. I’ve no idea if there is another hobby the necessitates a Spar breakfast but if there is then I don’t want or need it – Lucozade Sport and sugary breakfast bars  at that time of day does very odd things to me. As all anglers should we had a quick peak over the bridge in town before we bought our day tickets. This bridge is miles from where we fished and the river is totally culverted so we learned nothing about the day ahead other than that it was foggy. Content with our findings we bought our tickets and got back on the road.

The guys plug away early in the morning

When I’ve closed my eyes and imagined the Dee I’ve always thought of a wide, steady river with easy sloping edges and bank to bank golden gravel over which hovers a thousand huge grayling. The narrow, boulder strewn and over hung river which was walloping through was a bit of a shock. So powerful was the Dee here that within a few minutes of commencing fishing one of our party got themselves stuck and an area of nasty flow. To save face I won’t mention any names. After I had rescued Jason I dropped down to the back end of the same run in the hope of finding some gravel but could only find small brown trout spawning hard on the surface of the water amongst the colossal olive hatch that was of no interest to them. 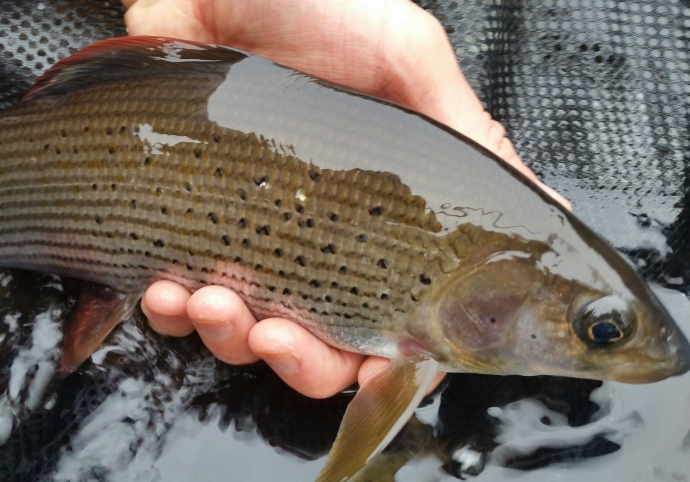 A solid fish from amongst the weed beds

After a fruitless hour losing freshly wrapped flies on the boulders,  experienced Dee angler Alex made the decision that we should try the gravel flats a few hundred yards further down, a very good call as it happened. All three of us picked up fish, often between the weed frongs that were still bright green and strong even in November. The Dzigi Dzigi accounted for all but one of my fish during the day and the sz16 silver version seemed particularly popular, although lobbing two tiny flies all day on a long French leader has taken its toll on the angler… 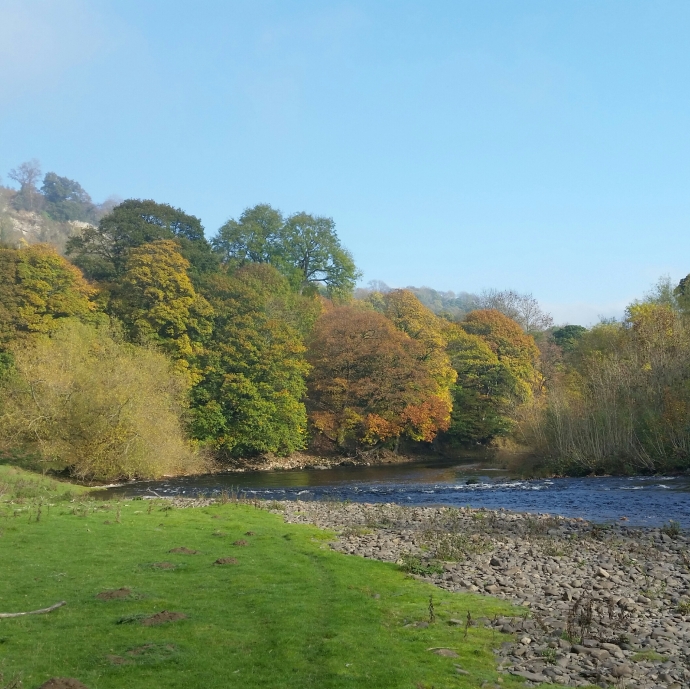 A full relocation after lunch saw us led by Alex to a large flat which from some distance away held great promise. While the last of the fog clung on to the tops of the hills the valley was now drenched in sunshine and the autumnal glow was exacerbated by staggeringly high air temperatures. Our angling exploits may not have broken any records but this was to be the highest temperature ever recorded in the UK during November and boy did the bugs know it.

The fishing here didn’t quite live up to its early promise and while I did land a smaller grayling first cast it was to be another two hours before I hooked what proved to be the final fish of the day, a particularly camera shy grayling of around 1lb the made a break for freedom before we could take a reasonable picture.

As good as the photos got, this lady to a flying leap…

I’m not sure what the lessons from the day are. Keep casting I guess, this was one of those days that promises so much but never seems to get going. What we felt should have been a day to rack up a cricket score turned in to an attritional scratch around in the dirt for bites.  It may be that between the three of us we just didn’t crack the code but as anglers such self deprecation just wouldn’t do. Great water, gorgeous weather, all the right flies, three anglers going at it and still it wasn’t enough. I guess that’s why they’re really called the lady of the stream….